MEDLAND: Vettel shouldn’t be scared of what’s next

Abu Dhabi in November is set to be Sebastian Vettel’s 300th and final Formula 1 entry, and 299th race start.

That he will register those accomplishments in a largely uncompetitive car after a number of years without a victory doesn’t do justice to a driver who, at his best, was untouchable.

And his best was sustained for a number of years.

Recency bias can overshadow what a driver achieved in the past, and while Vettel will no doubt wish he had enjoyed greater success with Ferrari and Aston Martin, he can look back very proudly on what went before.

As a product of the Red Bull young driver program, Vettel was most at home with the team that had brought him through the ranks. But prior to making the step up, he did what only the best drivers seem to do and walked into the junior team – then Toro Rosso – and made himself impossible to ignore.

His debut pole position and victory for Toro Rosso at Monza was the stuff of dreams, giving the former Minardi team its first success on home soil and beating Red Bull to its first win.

It was a stunning performance, and far from a one-off, as it was one of six top-six finishes in the final seven races of the season. It didn’t take him long to find his feet at Red Bull, either, and threaten to ruin the Brawn fairytale in 2009 before embarking on a run of four straight championships that ties him with Alain Prost and leaves only Juan Manuel Fangio, Michael Schumacher and Lewis Hamilton ahead of him on that front.

In terms of overall race wins, you can whittle down the number of drivers with more than him to just Schumacher and Hamilton.

Vettels’ breakthrough win with Toro Rosso at Monza in 2008 set the tone for what was to come. Glenn Dunbar/Motorsport Images

The move to Ferrari promised so much yet failed to deliver, and from then on Vettel’s driving reputation rightly took a hit. He never reached the same heights, but he did evolve into an incredible spokesperson for issues beyond just racing a Formula 1 car, and as he fronted up about his retirement at the age of 35 – a decision he made final on Wednesday – it was his honesty that reiterated what a special character the sport will be losing.

“I’m always looking forwards to what’s next,” Vettel said when asked to reflect on career highlights. “The best race is still to come, which obviously you could say is bull**** if you are not racing anymore, but I think I’m referring to it in a better picture, as in life.

“I think for every sportsman and woman, actually, the biggest challenge is probably waiting for us when we decide to do other things. That’s what I’m facing and in all honesty, I’m also scared of what’s coming. It might be a hole and I don’t know how deep it is and whether I’ll get out of it.

“But I have lots of support and people who have supported me along the way and will continue to help me and give me direction and guidance. Hopefully I’ll make the right decisions in the future to progress and become a better version of myself in 10 years time.”

There was a suspicion in the paddock that Vettel could extend this part of his career in order to retain the platform it offers him to discuss more important matters than racing, but the father of three admits that’s not a justifiable reason for him to commit to further seasons, even if he will miss the buzz of driving.

“No, I think that would be the wrong motivation to keep doing what I’ve always done to be competitive and to win, just to express your opinion on some topics,” he said.

“I think that would be the wrong motivator. It feels like the wrong thing. So maybe yes, I will lose voice and reach, but to me voice and reach have never been at the foreground. It has always been the message because it’s what I really believe in. I do see that we are facing the biggest challenge humanity has ever faced and if we don’t win this race, then the world will keep spinning but without us. 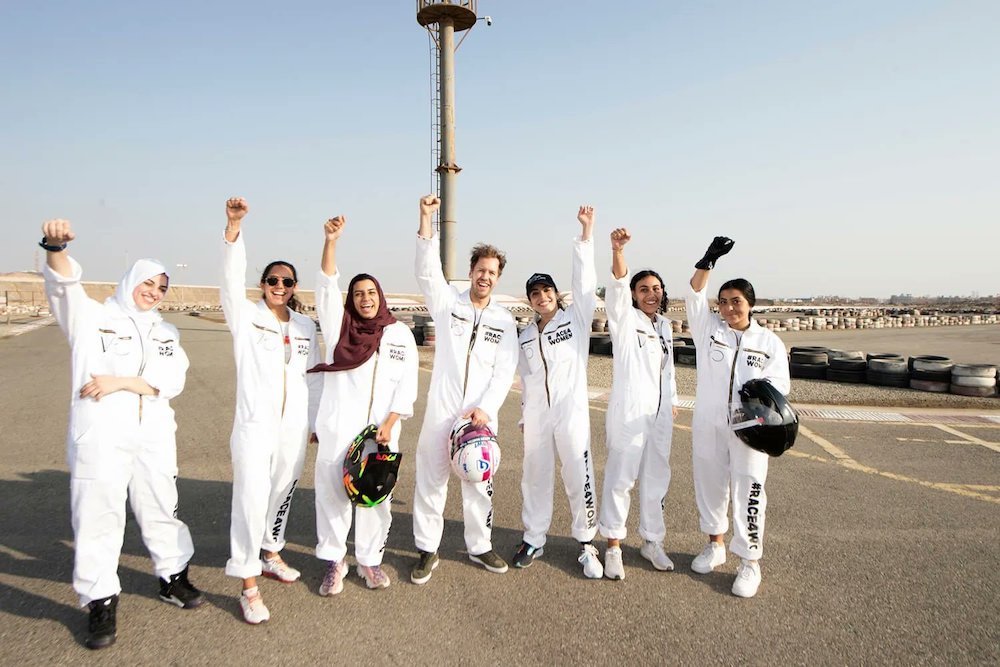 In recent years Vettel has increasingly used his platform to speak about climate, social justice and other issues (such as advocating for womens’ rights in Saudi Arabia, above) but says the loss of his platform is not reason enough to stay in F1 beyond this year.

“I’m into the subject and then I think once you become aware… I think it’s a little bit the character where you are trying to find the next thing to be curious about what could make you faster, what could give you an edge. It’s the same sort of characteristic that made me look for more answers, made me ask more questions and it leads onto the next thing.

“By realizing how big the challenge is, I think there’s a big temptation to get into a negative spiral and panic and get very anxious about the future. But at the same time, I’m reading a lot and hearing a lot, and meeting a lot of people that are shifting the world in the right direction, making the world a better place and really fighting, committing and sacrificing their lives even, to make it a better place in the future. There’s plenty for us to do. But at the foreground has always been my beliefs, not an agenda or campaign.”

It’s those beliefs that motivate Vettel to continue trying to encourage change and action, something he won’t stop doing throughout his final 10 races or beyond.

“I think when it comes to the climate crisis, I think there is no way that F1 or any sport or business can avoid it, because it impacts all of us,” he said. “Maybe it’ll be pushed back or be more quiet, but it’s only a matter of time – that we don’t have.

“The biggest part is probably if you look at Lewis and myself, we’re older now than we were 10 years ago. I think this is just a normal progression. We have the immense privilege of seeing the world and so many things. If you don’t ignore everything, it does something to you. I’m not a stand-out example. I look at my friends around me and their thoughts are very different to the thoughts they had when they were in their early 20s. I think part of that is normal.

“What hurts me is that I feel people like George (Russell), Lando (Norris), Charles (Leclerc), and Max (Verstappen), they don’t have the same freedoms as maybe Lewis and I had. And whoever is coming after them will have even less freedoms because it’ll be even more central and dictating more and more the way we are living and have to adapt our lives. That, I don’t think, is fair and I’m prepared already to fight to have that kind of justice for the kids that go go-karting today, to have the same career that I had.”

And what a career it has been. Perhaps there’s even room to add a podium or two to his tally of 122 – again, third on the all-time list – and there will almost certainly be an increase to the total of 3076 points before he’s done.

He can be proud of the stats with which he will leave F1, but he can also be proud of the person he became. It should certainly stand him in good stead for whatever is to come next.

WATCH: Pass masters – the best overtaking move from each Grand Prix in 2022